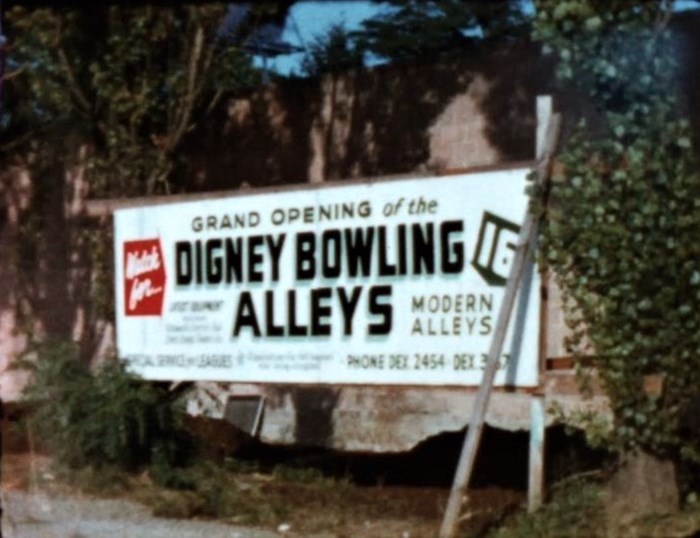 A new collection of Digney family films are now available for viewing on Heritage Burnaby. This collection has been digitized by the Burnaby Village Museum.

Andy Digney was born in England in 1886 and immigrated to Saskatchewan in 1905, at the age of nineteen. In 1936, Andy, his wife Alice and their son Ernest “Dig” moved from Brandon, Manitoba to Burnaby. Andy purchased a home on two acres of land on the corner of Kingsway and Marlborough where he also decided to build the The Oak Theatre. He operated The Oak Theatre from 1937-1945, although it remained in operation until 1968. As a Burnaby entrepreneur, Andy was also responsible for the Digney Speedway (1948-[1958]) and the Digney Bowling Alley (1955-[1985]). Andy and his son “Dig” liked to capture special events and milestones of family life using their 8 mm camera. Films in this new collection provide glimpses into daily life, family outings, vacations and special events. Some of the highlights include:

Through the Lens of Andy Digney  [between 1934 and 1964] A compilation of edited film content shot by Andy Digney and narrated by Lisa Codd (Burnaby Village Museum).

Construction of Simpsons-Sears building - 1954  Two short films by Andy documenting the construction phase next to his home on Bonsor Avenue.

Construction of the Digney Bowling Alley - 1955 The Digney Bowl opened on August 19, 1955. Andy Digney, his wife Alice, son 'Dig' and daughter in law Joyce all worked at both the Digney Speedway and Bowling Alley. In 1956, Andy decided to finally retire and sold the bowling alley and home on Bonsor Avenue to his son 'Dig' which he paid for over time. Dig’s son Bruce took over the Bowling Alley in 1980.