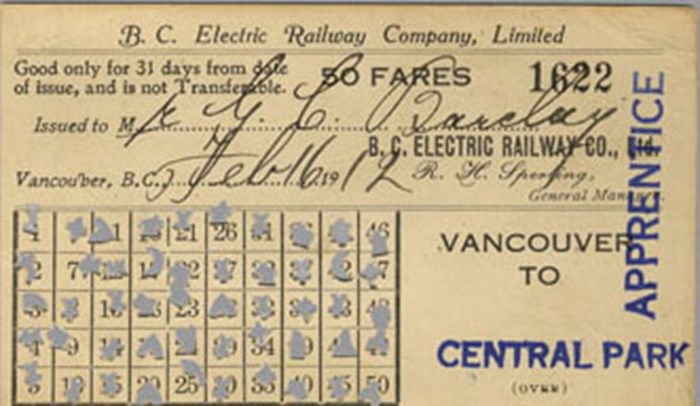 Up until the 1950s, the B.C. Electric Railway Company (BCER) operated a network of electric trams and streetcars that moved people and freight throughout the Fraser Valley and Metro Vancouver area. This 1912 monthly pass allowed the rider to use the line between Vancouver and Central Park for up to 50 trips in a month. In 1912 alone, there were over 62 million passenger trips and more than 447,000 tonnes of freight were handled by the BCER network.

When the network was dismantled in the 1950s, most of the streetcars and interurban trams were destroyed. One of the surviving tram cars, Interurban 1223, is on exhibit at the Burnaby Village Museum. The Museum is open for the summer season Tuesday through Sunday, plus holiday Mondays, from 11am to 4:30 pm, until Labour Day. BV993.45.7